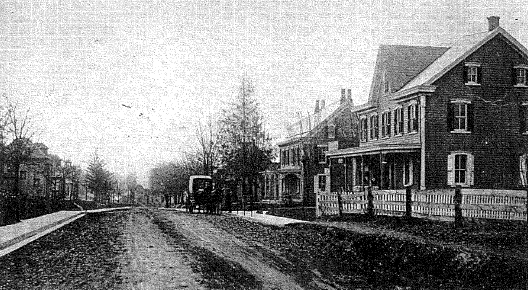 The Chronicle of Chalfont

The town that we now call Chalfont Borough, located between the north and main branches of the Neshaminy Creek, has a long, rich history that enhances the distinct character of the town.

The land where Chalfont is situated was originally settled by Lenni-Lenape Indians, but the history of the modern-day Borough of Chalfont began when Simon Butler purchased a tract of land that included Chalfont and New Britain. Mr. Butler was extremely influential in the area; he acted as the Justice of Peace, built the Butler Mill, and oversaw the construction of roads, including Butler Pike.

The small village was a convenient place for travelers to stop, and its most noteworthy feature was an inn originally owned by Henry Lewis.  Allegedly, Morgan’s Rifleman, a ragtag band of guerilla snipers formed during the Revolutionary War, spent a week at the inn on their journey to Quebec.  As the hotel changed hands and names, so did the village.  It was called Butler’s Mill, Barndtsville, Whitehallville, and Kungle’s Tavern in subsequent years.  Although the original tavern structure burned down many decades ago, Borghi’s Restaurant (now the Pop Inn), marks the location where it was rebuilt in the early 1900s.

In the mid-1800s, the expanding Reading/Philadelphia Railway built a train station that would bring prosperity and recognition to Chalfont.  The railway named the station Chalfont for the town Chalfont, St. Giles in Buckinghamshire, England where William Penn is buried.  In 1856, the first trains departed from the new Chalfont train station with farmers’ crops to be shipped to Philadelphia. As of 2015, the train station is still operational, although the original building burned and was reconstructed.  An ability to easily import and export goods to the city allowed for cultural and economic expansion within the town.  A growing Chalfont was officially incorporated as a borough in 1902.

Today, Chalfont Borough is home to about 4,000 people and boasts many businesses.  Despite numerous changes that the Borough has undergone, layers of history are still plainly visible in the building facades within the historic district, the residents’ pride, and the local lore.  The unique identity of Chalfont continues to develop as we make new history for ourselves every day.